Hard Boiled Egg: How to Get It Perfect and What to Do With It

What are the requirements to buy a house as an undocumented immigrant in Texas?

What are the three racial justice questions that NYC voters will be able to answer in the November elections?

It is the simplest and safest preparation in the hot months, but making it tender and delicious has more science than it seems. By the way, we explain everything you can do with it.

The person who considered that frying an egg was the simplest knowledge of the kitchen, as much as to differentiate between those who know how to cook and those who don’t with a “he doesn’t even know how to fry an egg”, was very wrong. Not only because, in my opinion, frying an egg well – with the white cooked and the yolk creamy – is not culinary kindergarten, but because there is something that is much easier and is really very basic: making a hard-boiled egg. The egg is a very interesting and complete food, not only from a culinary point of view due to its multiple uses, but also from a nutritional point of view: its protein has all the amino acids we need and, as an extra, it is very digestible.

Making it cooked is perhaps the fastest, easiest and least cumbersome way (that is, dirtying a few pots) to include it in the diet, and also, on these hot days, one of the safest if we take into account some aspects that come next . Having said all this, here is a brief guide on the boiled egg, essential if you still don’t know how to make one well (how did you survive all this time!?) and useful if you already control cooking but want to learn some details, curiosities, applications or ways to improve it.

What does it consist of boiling an egg?

Are we going to start with something so basic? You are right. The simple answer is that cooking an egg consists of boiling it for a certain time so that the white and the yolk are cooked. If we go to something more technical, we can say that when cooking an egg, the heat causes a series of chemical reactions that result in the denaturation of proteins (that is, the loss of their structure), both in the white and in the yolk. , and its subsequent solidification. These reactions occur from a certain temperature: “in the egg white, the proteins begin to coagulate when the temperature reaches 63 ºC, while in the yolk, the proteins coagulate from about 70 ºC” (La cocina and science, 2001). We deduce, then, that the key to the perfect cooking of an egg is to control the temperature at which it reaches, mainly, the yolk.

For physicists and geeks of the utmost precision, there is even a formula for cooking eggs, published in 1998 in New Scientist magazine by Charles Williams, which takes into account aspects such as the initial temperature of the egg, its diameter or the temperature of the Water. Without any intention of diminishing the work and dedication of Mr. Williams towards cooked eggs and for practicality for us, the rest of us mortals, we will keep only the essentials of this formula: there are different aspects of the egg that affect its cooking. For the rest, we will control the temperature of our eggs as it has always been done, over time. The rule is simple: the longer you cook an egg, the more solidified the white and yolk will be, and the less, the more liquid or creamy.

What is the best way to cook an egg?

The most efficient way and the one that allows greater control when cooking an egg -with the white and the yolk fully cooked- is as follows: bring enough water to the boil in a saucepan to cover as many eggs as you are going to cook, one once they boil, introduce them and cook them for 8 minutes if they are not size S, 10 if they are size M and 12 if they are size L, remove them after that time and place them in ice water to stop cooking quickly.

This last step, which you can do in a bowl of ice water or under cold running water, is important so that the egg does not continue to cook and, not least, do not burn your fingers when you go to peel it. Another way to avoid the latter is by peeling the eggs under a trickle of water, something that will also help the shell to detach from the white more easily. This is not, however, the only and correct way to cook an egg. You can vary the time to make the yolk and white more or less soft, as Mònica Escudero explains in this article, or use other methods such as the pressure cooker, the microwave or steam cooking.

What things should I not do when I cook an egg?

Now that we know how to do it right, let’s move on to what we shouldn’t do, or what is less recommended, when boiling an egg. First of all, do not put the eggs in the water until it is boiling. If you put the eggs in early, they will start to cook as the water heats up and controlling the temperature and time will be much more complicated. Second, try not to put the eggs in the boiling water straight from the fridge. Eggs have a small air chamber inside them and the sudden change in temperature can cause it to suddenly expand, crack the shell and make for an unpleasant boiled egg fest. If you have forgotten to remove the eggs in advance, you can add a splash of vinegar to the cooking water to avoid spilling a little in case the shell breaks.

Thirdly, please don’t cook anything else in the same water where you are making the eggs. If you are going to make a pod salad with a hard-boiled egg, I know it is tempting to do both things together, save a pot to wash and a few cents of water and electricity, but it is better to watch over your gastrointestinal health. Although the shell of the eggs is usually quite clean, it is not worth taking a chance on salmonellosis. Fourth, try to respect the cooking time or the yolk will create a greenish edge that is not very pretty. Nothing will happen to you if you eat it, this simply happens due to a series of chemical reactions that occur with the sulfur present in the egg when it is exposed to heat for too long. 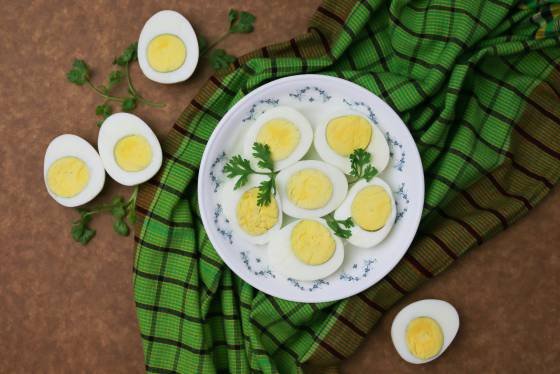 Salmonella, is that you?

If you are afraid of salmonella, you should know that it is something logical, especially on summer days, but that it should not drive you crazy if you take the necessary care at home and do not eat salad in a beach bar in full sun at 35ºC . Eggs are one of the most monitored and highly traceable products, and furthermore, as mentioned in this article by the Institute for Egg Studies, “laying hens from Spanish commercial farms are vaccinated against salmonella and are periodically checked for freedom from of the bacterium”.

The bacterium that causes salmonellosis multiplies rapidly in a temperature range between 5ºC and 49ºC and throws its best parties, especially between 30ºC and 37ºC, but as Beatriz Robles explains in this article, “the good The news is that the bacteria are easily destroyed by heat, and low temperatures slow down their growth.” After 70 ºC inside the food, Salmonella is destroyed and makes the egg a safe food. It is important that you consume it right away or, otherwise, keep it in the fridge for a maximum of 48 hours.

What can I use boiled egg in?

The applications are endless. You can include it in almost any salad to make it more complete and convincing. Some examples: jacket, chickpeas, green beans and apricot, beetroot with herb dressing or artichokes and anchovies, although you can also add chopped egg to pasta salads, any legume or green leaves, among other options.

Share
Facebook
Twitter
Pinterest
WhatsApp
Previous articleWhat is it like to live in Miami: how much does a rent cost and what is the average salary in this area of ​​​​the United States
Next articleHarry Styles comments on spitting on Chris Pine during concert

What are the requirements to buy a house as an undocumented immigrant in Texas?

According to experts, undocumented migrants in Texas can also apply for a mortgage loan. We will tell you...
News

What are the three racial justice questions that NYC voters will be able to answer in the November elections?

The new cosmetics: medical cannabis, peptides and probiotics at the service of beauty

Vintage and modern beards: everything you need to know to look perfect